Lenovo has been in the process of changing their docking solutions to use Thunderbolt 3 throughout the different docks. Last to be updated was the dock for the Mobile Workstations (P series ThinkPads). This dock is called the ThinkPad Thunderbolt 3 Workstation Dock, which is quite a mouthful. 🙂 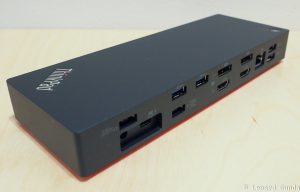 The Thunderbolt 3 Workstation Dock is a general docking solution aimed at ThinkPad mobile workstations. It contains a great selection of ports to connect a wide array of peripherals to the dock. It also tries to solve the double cable problem that mobile workstations have (TB3 power is not enough, need separate power). 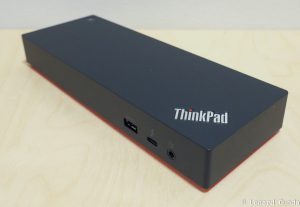 Thunderbolt 3 as the docking technology

Lenovo transitioned to using Thunderbolt 3 (TB3) as their docking technology. No more mechanical docks and proprietary connectors, just a single standard in use. I think this is a great idea. It also means all the docks are now compatible with all the machines.

The problem is, that the Thunderbolt 3 power delivery standard allows for a maximum of 100W to be delivered through the TB3 connection. This also means that the docks cannot power Mobile Workstations using only a TB3 connection.

For example, the ThinkPad Thunderbolt 3 dock (pay attention to the name: this is another dock, not the one reviewed in this article!) can be used perfectly well with the ThinkPad P52 I have. In one of our offices, the standard dock is the TB3 dock. But if you connect the TB3 cable to the ThinkPad P52, it will not deliver power to the notebook. Everything works, displays, peripherals, but there is no power to the notebook. If you fail or forget to connect a separate power cable, the notebook will be using battery power.

This also means that for regular TB3 docks, you need two cables connected for the mobile workstations, instead of just a single cable. How does the Workstation dock solve this problem?

For the Workstation Dock, Lenovo came up with the idea of a double cable: Both ends have two connectors, one for power and one for TB3. This way, a single cable is used to connect to the docking station. It is also cleverly engineered: on the notebook, the power and TB3 ports are placed near each other, so even if you do not use the special cable, the ports remain usable. And the cable is engineered to take into account the exact position of the ports.

The solution is not as neat as a single connector, but is certainly better than connecting two separate cables. The connection is a little flimsy, which brings us right into one of the problems with this dock: sometimes, power is not delivered. (more details in my troubleshooting article).

There is a great selection of ports on the Thunderbolt 3 Workstation Dock. In addition, the top has a power button that can be used to turn on the computer. So there is no need to open the lid, just connect the table and press the button on the dock.

The front side has three ports:

The left side contains the Kensington lock port.

The back side contains the majority of ports.

The TB3 Workstation Dock solves the docking needs for the Lenovo ThinkPad mobile workstations. Port selection is great, and by using a cable you are not as restricted as a mechanical dock. The TB3 standard is mostly plug and play, with some occasional minor issues (I also have a troubleshooting article).

If you have a new mobile workstation from Lenovo then I can recommend getting this dock for your work or home desk for easy connectivity. The price is little bit on the high side. Compared to mechanical docks, the price hike for these new TB3 docks has been impressive.